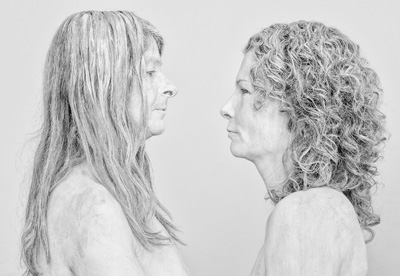 “bin bist ist” / „am are is“ was photographed in the Bozen museum. They are white acts in white rooms. Two women and two men between the age of 30 to 58. The models were painted by bodypainter Johannes Stötter and photographed by Heinz Innerhofer. Afterwards a film was produced out of the images and underlined with a soundscape by Caroline Profanter.

In 2015 the film was shown with a live recitation by Christina Auer in the ARS Elektronia DeepSpace in Linz.

Images from the project won the gold medal at the TRIERENBERG SUPER CURCUIT THE WORLD’S LARGEST PHOTO SALON 2015 in the category portrait and reached the final at the Siena International Photo Award 2015. A part of the exhibition was shown at the R-Evolution Summer Festival 2016 in cooperation with FIOF Fondo Internazionale per la Fotografia in Castello Svevo di Barletta (BT) and in October and November 2016 at Gallerie Zebra, Herrengasse, Wien.

The project was presented in different international photography magazines:

Everybody, some better than others, manages to present an image to the world. It’s a modern adventure between adaptation and individuality.

Be yourself – but avoid to be different than others.

The good news: Luck is still possible, the occident persists, and we will continue to look for love. We don’t need to believe in a god, we don’t need to marry, we can tattoo our body. We can become doctors with rings in our noses, and be hetero-, homo-, bi-, pan-, poly- or other-sexual.

Never has the individual be more free than today. Be who you are, the world shouts at us. Bloom! Do your own thing! Be someone! That’s the imperative of nowadays individuality.

The bad news: Never has the pressure to be happy and succeed greater than today. We are damned to be happy. We are forced to succeed. We have to be ourselves. Individuality has become a constraint.

As a result of all of that we decide to ask ourselves or ignore the deciding question: Do I know who I am anymore?

Studied at the ZeLig, school for documentary film, tv and new media in Bozen. After working as a documentary film camera assistant for ORF, ZDF, SRF and RAI he returned to south Tyrol to complete a 3-year-training for bookbinding. By accident Heinz Innerhofer moved to Munich, where he worked as a photography assistant. He started as a freelance photographer and graphic designer in 2001 and completed his 5-semester studies at the “Prague Photoschool” Austria for artistic and eclectic photography, with honors.

Today Heinz Innerhofer lives and works as a freelance photographer in St. Lorenzen.