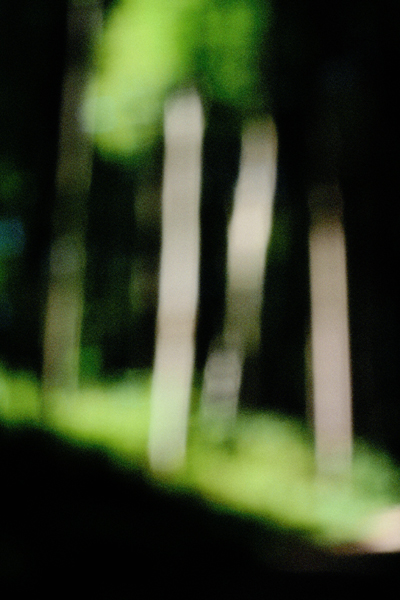 With the help of pinhole photography, photographer Markus Hippmann captures his motives in a way that blurs the shape and dissolves the outline. With this technique his photos remind us of impressionistic paintings, with which the photographer wants to distance himself from the objective vision and instead capture light and colour impressions. Thereby Markus Hippmann reaches the quoted “innocent view” of impressionists and a “sight free of representation”, which, through the observer's own interpretation of the viewed, again becomes an idea. “What do you see in this image? What do you want to see?”, the photographer asks the observer. “Are these colours, dots, lines, or is it after all a forest?” The impression of each image changes in the sense of the pointillist impression with the deliberately chosen rough resolution of the images and with that the connected visibility of every dot. In that sense Markus Hippmann's work acts as a double solution: Dissolving the form through rough solution.

„After many years of being a photographer, I finally managed to make the blurry pictures I always dreamed about.“ M.H.

After finishing school Markus Hippmann moved to Vienna to study where at the end of the 80s he saw the retrospect of photographer Helmut Newton at the former “20er Haus” (Museum of the 19th century) . Excited by the photographer's work Markus Hippmann started taking black and white pictures himself and developed his first prints in the dark room at the student home Vindobona. After the iron curtain fell he applied to study at the Prague Film Academy and started to study Photography and Camera. Next to his studies he shot his own short films and continued to deal intensively with photography. He focused and focuses on the search for light, colour and form as well as the suitable reproduction of emotions and feelings.

After his return to Vienna, Markus Hippmann worked in the fields of photography and film and held several photography workshops. At the beginning of 2000 he founded the Vienna Photoschool (Fotoschule Wien). Since then he teaches photography at the school, organizes photo projects and regularly exhibits his own photographic work.