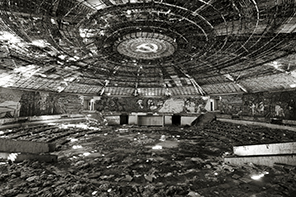 The Photo project “Forget Your Past” by photographer Nikola Mihov shows the destiny of important monuments of the communist era in Bulgaria. Built with huge expenses, an expression of national pride, most of the monuments are now plundered or neglected. It doesn’t matter if they show heroic acts by the red army or the April rebellion against the Ottoman empire, they all have something in common: They are silent symbols of a forgotten past.

After the political change in 1989 a number of iconic, communist buildings were demolished. Nobody knows the official numbers of how many monuments actually existed since the archives were destroyed. More than 100 monuments of this kind do still exist. In 2009 the Bulgarian photographer Nikola Mihov started his research, travelled to Bulgaria, talked to builders and architects, read his way through archives and looked through flea markets and took pictures of these monumental buildings of the communist time.

Nikola Mihov was born in 1982 in Sofia, Bulgaria. In 2002 he moved to Paris, where he started to take interest in Photography. Since 2008 he took part in numerous international exhibitions and festivals. He was nominated for the “Essl Art Award” (2011) and for the price by the Salon de la Photo in Paris (2012). Nikola Mihov is co-founder of the virtual museum of graphic-design of the social era in Bulgaria and the platform for contemporary Bulgarian Photography “Bulgarian Photography Now”